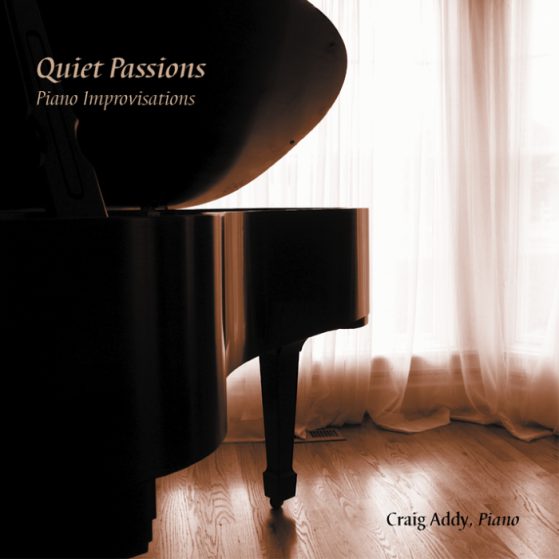 These soothing, calming, yet heartfelt improvisations for solo piano and piano and orchestra are a fusion between classical music and jazz improvisation.

Canadian composer Craig Addy’s training in music was very traditional. From an early age, he studied classical piano, music theory and history. By his mid-twenties, he had two music degrees: One from the University of British Columbia and one from the Royal Conservatory of Music in Toronto. However, during all of those years of disciplined studies, Craig was secretly exploring another world of music.

Craig thanks his parents for not telling him to get on with “real” practice when they heard him ‘goofing’ around at the piano. This is how Craig learned how to improvise and compose music. In fact, Craig created his first composition before he even new how to notate music. There was a brief exploration in jazz during high school, but that genre didn’t intrigue him enough.

After getting his university degrees, Craig was left wondering where his talents would ‘fit’ in the world of music. He kept playing, improvising and composing while he created a business as a graphic designer and printer. As his business grew, time for music was limited.

In 2003, he and his friend Howard Meadows formed the Amicus Music Duo. Music was back in Craig’s life. It was only then that Craig’s secret – improvising – was revealed to Howard in the practice room. Thanks to Howard’s persistence, Craig began sharing his unique style of improvising with others until it gradually became a regular feature in their performances.

In 2005, five on the spot improvisations were recorded in the studio during the creation of their first CD, “Purple Patches”. In November 2007, Craig released his solo CD “Soothe” which features 10 piano improvisations. “They are freestyle improvisations” says Craig. “Meaning, there are no predetermined chord sequences or tunes to start from. I just sit at the piano and begin playing. At it’s best, the experience is meditative, transformative and calming.” Like “Soothe”, Craig’s newest CD “Quiet Passions” (2008) also features a set of freestyle piano improvisations. The difference is that these touch on some darker emotional territory. Another difference is the addition of orchestrations to some of the improvisations. The orchestrations enhance and further define the character of the music.

“Quiet Passions” is a wonderful contribution worth sharing in this ever more hectic world. Craig has found his place in the world of music. Audiences are left speechless upon witnessing this man’s talent! Stay tuned for more on this incredible composer.